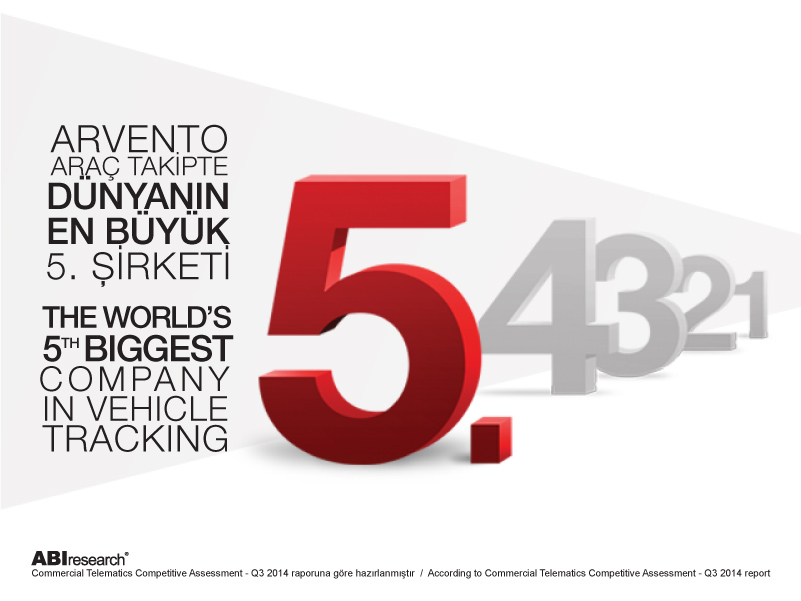 01 January 2015
According to the survey conducted by ABI Research about vehicle tracking companies with more than 100 thousand users, Arvento ranked as the 5th biggest company in the world in the list of vehicle tracking and fleet management systems.
BACK

According to the report “Commercial Telematics Competitive Assessment – Q3 2014” by ABI Research, a world renown research company, conducted on 21 vehicle tracking companies around the globe with more than 100 thousand users with a look into different segments including global and regional market share, regional coverage area, technological background, sectorial solutions, quality, reliability, pricing policy, financial and organizational strengths and innovation, Arvento, as a Turkish brand, ranked as the 5th among global giants. The research once again confirmed that Arvento is among the biggest players in the field of vehicle tracking and fleet management systems.

In his statement, Mr Özer Hıncal, Arvento General Manager said “This journey that we started in 2005 with 240 vehicles of 12 customers has been growing every other day with more than 450 thousand devices and over 33 thousand customers. We became one of the top 5 companies in the field. As a Turkish technology company founded in Turkey, our aim is to become one of the top 3 companies in the world by the end of 2015, to carry on our leading position to a global perspective and to falsify those claiming that Turkey cannot create a technology brand.”

Arvento, having received “The Infosys Business of the Year Award” last year in its own category under the European Business Awards among 17 thousand companies from 31 European countries has been taking confident steps to move on to a global level with this success. Arvento has been active in 23 countries in addition to Turkey with mobile tracking systems developed and produced with a technology know-how in Turkey.